Since 1992, the company produces sealings for pumps and armature from expandable graphite.

The company was founded in 1992. As one of the first companies in Poland, it began producing gland seals from expandable graphite. The graphite seals allow for the replacement of asbestos ones, which are known to have negative health effects. They've proven to be a great replacement for PTFE seals, especially in rotodynamic pumps.

Seals from expandable graphite can work in temperatures from -200°C to 500°C in an oxygen environment and up to 2000°C in an inert environment. They are self-lubricating and efficient at dissipating heat from the friction zones. They're characterized by low friction coefficients, both static and dynamic. They are resistant to all chemical media that aren't strong oxidizers, such as liquid oxygen, concentrated nitric and sulphuric acids. 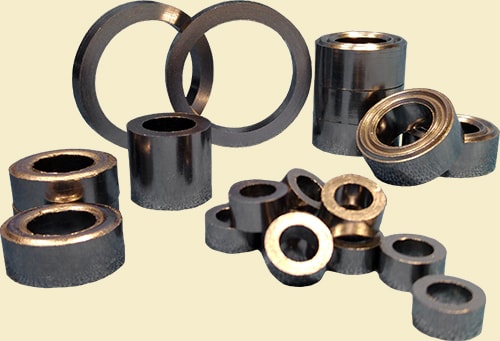 Nearly a quarter century of experience and many years of cooperating with armature and energy companies, allows us to produce high quality seals. Thanks to an internal quality assurance system and a responsible attitude to work, we haven't had any quality, quantity or time complaints.

By default, our seals have a density of 1,5 g/cm³, but we can adjust that value if requested.